This set is quite a rarity. It's a 25" Baird 8724. It uses a first-generation Thorn 3000 single standard chassis. I bought this set from a great bloke called Haden from Wigan who had it in his back shed. The set needed a bit of work to get it into working condition, but now it has a superb picture and the tube, which was a little flat to start with, boosted well and has lasted OK up to now. Click on the picture for a bigger view. 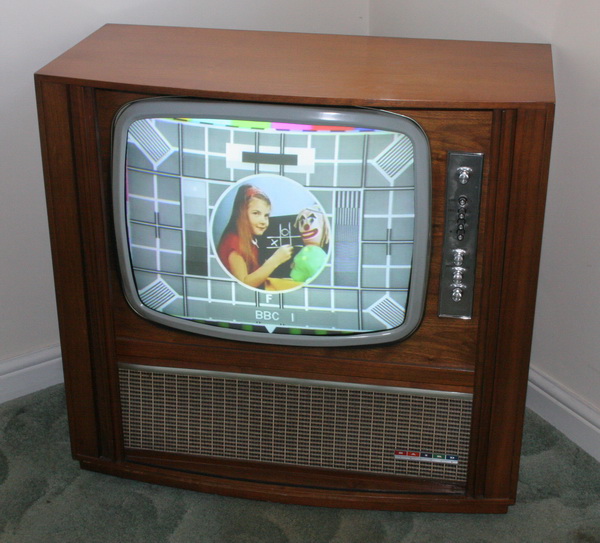 Next is another Baird set. This is the 25" model M712. The set uses the later Baird 710 chassis which was a development of the earlier 700 chassis. The chassis are easy to identify from the front of the set, as the 700 chassis has a rotary UHF dial along with the standard rotary VHF tuner and the 710 chassis has a 4 push button UHF tuner. 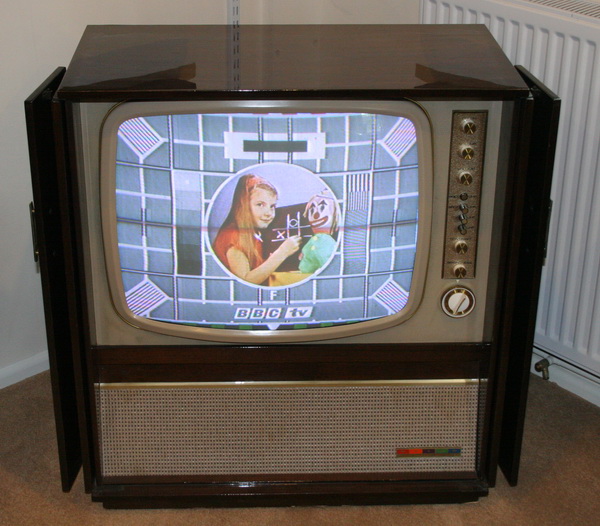 This set is a 1963 Bush CVB100 625-Line PAL experimental colour set. The chassis is a single standard unit of Rank's own design, and it uses some odd rebadged American valves in the line output stage as well as an American 21" RCA 21FBP22 shadowmask tube. This particular type of tube, which was also used in the Philips 21KX100 range as well as countless American sets, didn't have any implosion protection and so the set had a thick sheet of glass to protect the viewer. This set also uses a Telefunken chroma delay line in the Deluxe-PAL decoder, although the decoder design is Rank's own. Physically, the set is astonishingly well made, the chassis are all hand made and the circuits which aren't hard-wired are put together using "Pinboard". Click on the photo for a bigger view. 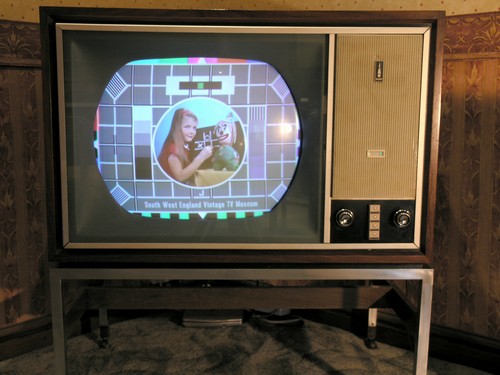 Next is a Bush CT187CS single standard colour TV which was very kindly donated to the museum by a great chap called Graham Evans. The set uses the first generation solid state A823 chassis. At the moment the set basically works, although it needs a bit of a tune up and a few minor faults to be sorted out. Not many Rank (Bush, Murphy) sets using this type of 25" tube survive today, especially in such good condition, so this was an excellent donation. (Many thanks Graham.) This picture doesn't really do the set justice, so I'll put another one up when the set is fully sorted out. In case you're wondering, the VCR underneath is a Philips N1501. 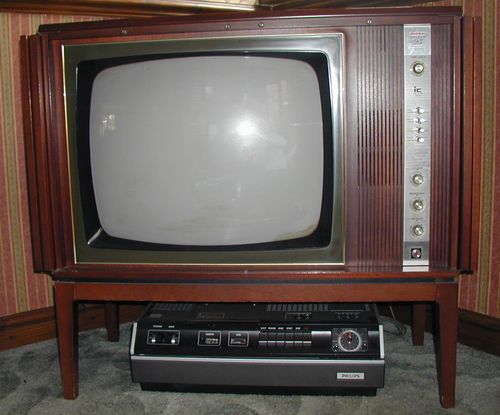 The next piccie is of a Decca CTV19 (Prestomatic).  I swapped this set with Andy Beer for a pre-war GEC television and, although it doesn't sound like much of a swap, the pre war set was a HUGE project and was missing it's cabinet and tube, and I was never going to get around to fixing it.  Andy is much better at that sort of project than I am, so I decided it was much better for Andy to have the set and get it working than to see it gathering dust at my house.  Go to Andy's web site to see how the set is getting on. (See the Links page.)  This set uses a dual-standard chassis of similar design to the CTV25.  There were a few physical modifications between the 2 size sets, but electronically the sets were all-but identical.  This set uses a combined UHF/VHF telefunken tuner.  Most of the 25" versions used a mechanically inferior Philips type tuner. (The Philips tuner was prone to seizing up, the latches often used to slip and the feel of the buttons wasn't as nice as the Telefunken version.) 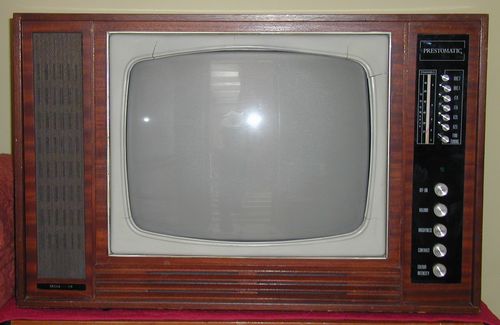 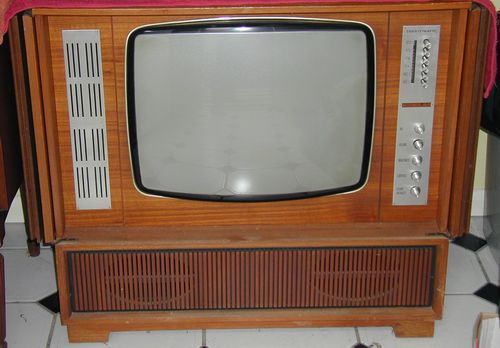 Here is yet another Decca. This model is a 25" dual standard model CTV25.  There were various models called "CTV25" with different cabinet styles.  The suffix indicated which particular model the set was. This set uses the Philips 6 button UHF/VHF tuner.  This set was bought from an excellent Chap called Dave from Swindon.  There is a minor crack in the top of the brown tube surround, but it can easily be repaired and moved to the bottom. 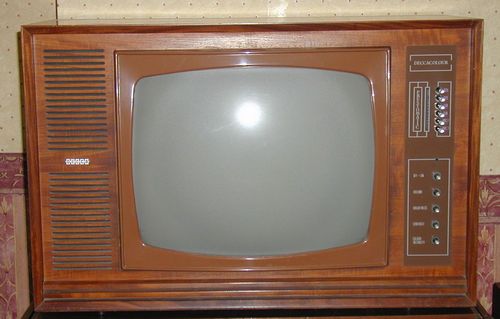 This set is a Dynatron CTV5 and belonged to a good friend of mine called Steve from Exmouth. It originally had a Pye 691 single standard chassis inside, although somebody has replaced the line output / power supply panel with the printed circuit version from a Pye 697 chassis. The tube used in this set is unusual in not having a cowl around the outside, instead it uses the unusual A63-120X 25" tube. (The rounder-looking 25" tube with a push-through presentation.) The set now works wonderfully well apart from a small convergence problem caused by a faulty blue line-convergence coil on the yoke around the tube. This shows up as "blue droop" - the blue and yellow separate along the horizontal axis at the extremes of the picture. A large percentage of the BF149 and BC147 "Lockfit" transistors in the decoder failed within a very short space of time after the set was recomissioned - always causing no-colour faults but for a variety of different reasons. The set also had a problem with visible frame flyback lines and this was caused by a bad earth on the I.F. panel. Thanks Steve - It's a truly excellent set. 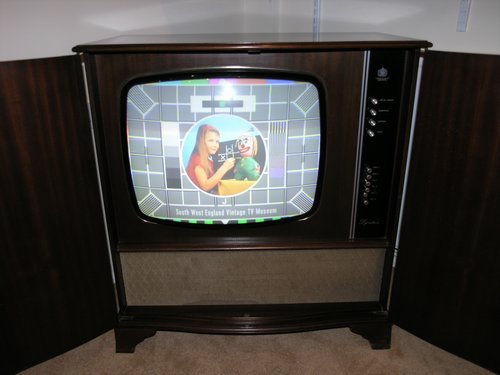 This picture is of a Dynatron CTV16.  It uses the Pye 697 chassis with a few modifications to the CDA and IF panels to incorporate the extra "Tint"and "Picture Sharpener" controls.  This set features a wired remote control, although one of the square channel buttons is missing on mine, which is a bit of a shame.  This particular set currently holds my record for the number of faults recorded on one set.  Although generally Pye 69x chassis sets are no less reliable than anything else of a similar age, this set has to be the most unreliable set I've ever come across.  I've had to sort out no less than 6 separate decoder faults, along with faults in the line oscillator, I.F., tuner, audio, C.D.A., line output and convergence sections.  The only panel that hasn't had a fault is the frame panel, and I'm expecting that to go wrong any day now.  I suspect the reason this set is so unreliable is to do with the construction of the cabinet and back panel which leaves very little room for heat to escape. 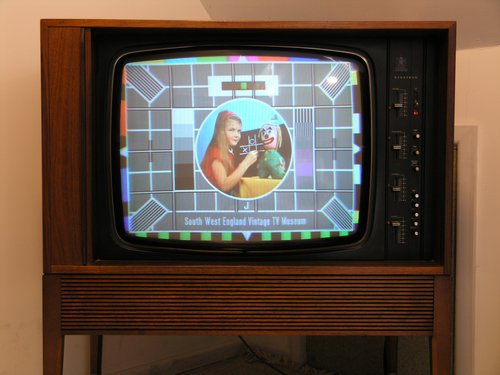 The next tellie is a 19" Ferguson model 3701 which uses the Thorn 2000 chassis.  It came from Mr and Mrs S. from Rochester in Kent.  Many thanks Mr and Mrs S.  The picture shows the set as collected from a garage where it spent the last 10 years of it's life so it needs a bit of a clean up.  See the Marconiphone 4701 description below for more information.

This TV is a Ferguson model 3700 which uses the 25" version of the Thorn 2000 chassis. The set, like the model 3701 set above, came from Mr and Mrs S. from Rochester in Kent.  This set also spent the last ten years of it's life in a garage, so it's also a bit grubby.  Unfortunately, the doors have swelled slightly in the damp conditions, but I'm hoping that they will shrink down a bit soon. 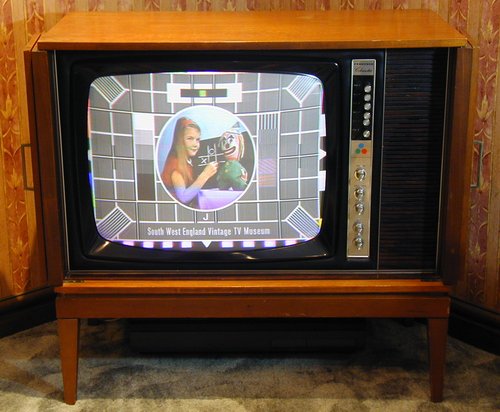 The next telly is a Ferguson 7C06.  I bought it from an excellent chap called Walther from a place near Manchester.  It uses the fairly rare (in the UK) Thorn 4000 chassis and a peculiar 22 inch 110 degree tube. (A56-160X.) Apparently these sets were very unreliable owing the Thick Film Units that the set used quite extensively. My set is missing it's little cover and "Ferguson" badge on the tuning dials and also it's ultrasonic remote control, so if anyone has one of these, I'd be very pleased to hear from them.  Click on the picture for a view of the chassis. 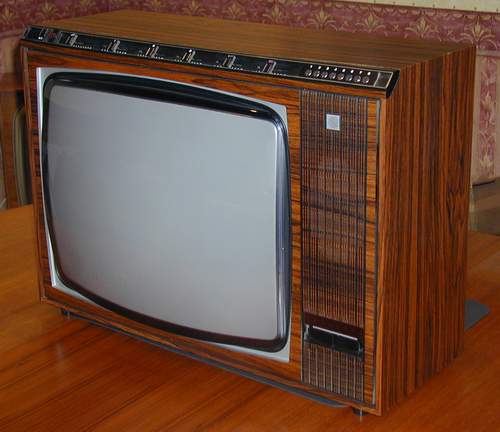 This next set is a KB model CK400, which utilises the KB CVC1 chassis, one of the last (possibly THE last) models of dual-standard (405 and 625 line) colour TV made in the UK. I've heard various stories regarding how many of these sets were made, some say less than 50, but I don't really know for sure. This set came fron an excellent chap called Graham Gosling and didn't take me much time to fix. In fact it took me no time at all to fix as a group of mates came round and fixed it for me. :-) Thanks TV-fixing-mates. The set now produces a wonderfully good picture - I'll update the image below once I've taken some fresh pictures of the set. 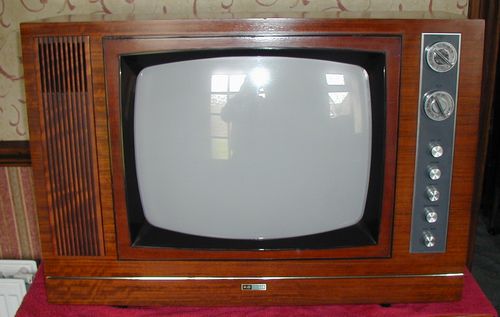 The next picture is of a Marconiphone 4701.  It uses a 19" Thorn 2000 chassis.  This set needed a moderate amount of work to get it going.  It had the usual Thorn 2000 problems with nasty "Callins" capacitors drying out and a stiff system switch etc.  Apart from the normal 2000 stuff, I had to replace the line output transistors half a dozen times as the system switch kept sticking and blowing them.  The 2000 chassis uses separate line output and EHT generator sections and the line output transistors can normally be replaced with BU208s.   Another common problem with the Thorn 2000 is the A1 decoupling resistor which goes open circuit and causes poor grey scale which can't be adjusted. 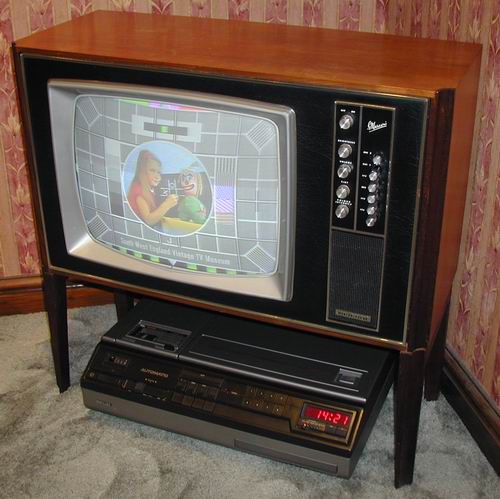 This next TV is a 19" 1968 Murphy CV1912. The chassis is a slightly modified version of that used in the later MK3 25 inch Murhpy CV2510 / Bush CTV25 televisions. The smaller cabinet was not wide enough to squeeze in the existing Rank 25 inch chassis unmodified, so the IF / audio panels were mounted vertically and the decoder / CDA panels were folded up and mounted opposite the IF / audio, and these were made to hinge down for servicing. The aerial sockets were also on the side rather than on the back. This particular set works pretty well although the decoders in these sets never seem to have quite enough "puff" and had to be set up perfectly to get a half-reasonable colour picture. 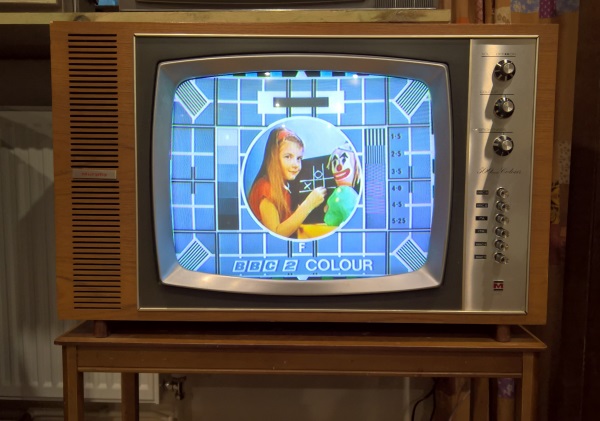 This next television is a single standard 20" Murphy model CV2011 using the common Rank A823 chassis.  This set came from an excellent chap called Dave from near Bournemouth. It has a couple of frame faults (A strange interlace fault and frame cramp at switch on.) 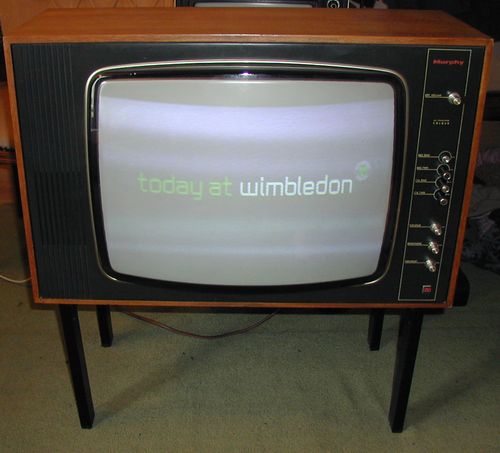 The next TV is a Philips model G25K500.  It uses a slightly later version of the G6 chassis than that of the G25K500 on page 1 of the colour TV gallery.  The main difference is that this later version has no colour-off, tone or tint controls; it also has no tuning indicator.  Other than those minor differences, the sets are pretty much identical.  This is another set which came from Mr and Mrs S. from Rochester in Kent. 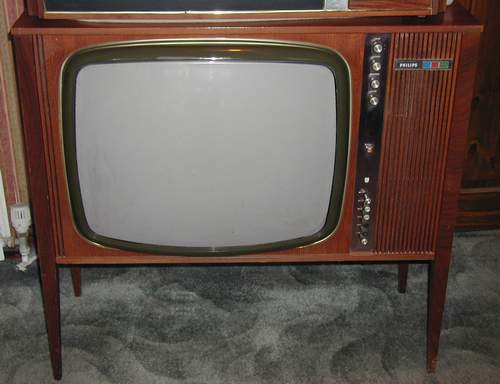 This next set is another Philips experimental set model 21KX100.  It uses a similar chassis (K4) to the Philips model 21KX102A (See the colour TV gallery page 1) except that this model does not have the wired remote control facilities as the 21KX102A does.  This picture was taken in the Philips museum in Eindhoven in The Netherlands.  This set has a valve NTSC decoder fitted on the main chassis as it was originally designed for the Canadian market, however, a later modification saw the addition of a printed circuit PAL decoder so that it could work in Europe. 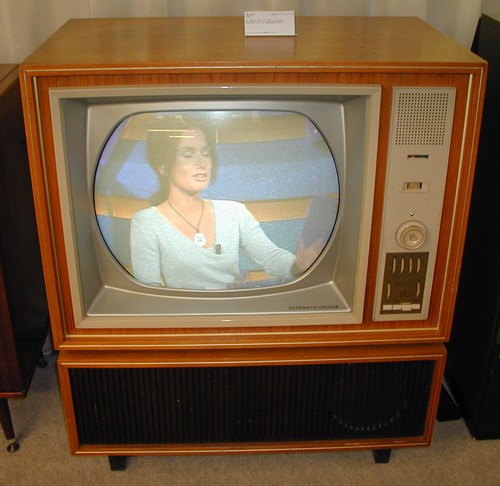