This set, a Philips 21KX102A, uses the all-valve Philips K4 colour chassis.  It was made in 1964, three years before a regular colour television service started in the UK and was used as an experimental set.  It started out as an NTSC set designed for Canada, and as such, didn't have a single transistor in it, however it has had an official Philips PAL-D decoder fitted to make it work with the British PAL system.  The tube used in this set is a 21" circular RCA shadowmask tube (Kinescope) fitted with a bezel to make it look slightly squarer than it actually is.  Click on the picture for a bigger view. 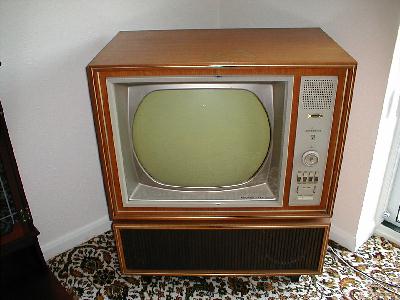 The main chassis of the K4 is completely hand-wired, and is very daunting to work on.  Luckily, Philips made the task of servicing and adjustment slightly easier by enabling the whole chassis to slide out the front of the set on rails.  To access this facility, two screws must be undone underneath which allow the speaker grill to be removed.  Four more screws must then be removed to unlock the chassis, which can then be slid forward with the aid of telescopic rails.  Most of the main adjustments are available from the front without unlocking the chassis.  These include Height, Linearity, Horizontal and Vertical Shift and all the convergence controls.  All the leads and connections are long enough to run the set with the chassis in the servicing position. 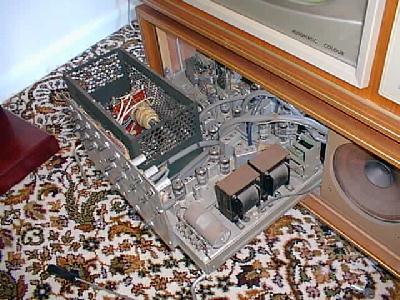 The Cathode Ray Tube employed is a circular 70 degree shadowmask tube - Philips model AX53-14 (although it was actually made by RCA - Probably model 21FBP22.)

TV historian Ed Ellers writes: RCA had planned to introduce a 90-degree round tube in 1962, but they had a lot of trouble with the project and ended up holding off until they could introduce a 25" rectangular tube instead. (This was late in 1964, but 21" round tubes were still more popular in 1965; the ratio changed in 1966, and the last 21" round tubes in new sets were sold in 1968.) If the tube has a frosted anti-reflective faceplate, it's a 21FJP22; there was also a version called the 21FBP22 that required a separate glass faceplate for safety, and both were introduced in 1961. The first 21" color tube, the 21AXP22, was introduced in late 1954; this had a metal shell and its screen was somewhat flatter than yours. The first all-glass version from RCA was the 21CYP22 in 1957.*

Thanks to Michael Van Der Smeede, I now have a brand new line output transformer for this set.  When I get a spare evening (hopefully sometime soon,) I will replace the faulty unit.  The set does require a small amount of modification before installing the new transformer; however all the instructions are provided in the box.* 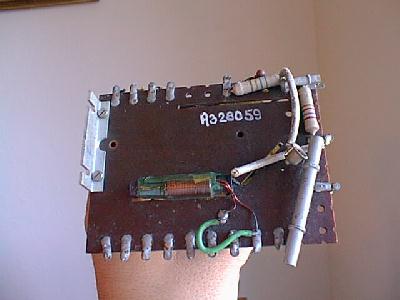 If you would like any more information about this set, send me an email and I will see what I can do...

Ed Ellers for the wealth of information about the CRT.
Michael Van Der Smeede for the new Line Output Transformer.

Both very much appreciated...

Return to the Colour TV Gallery